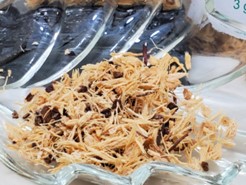 Yucca, or cassava, is a type of shrub native to South America that is widely cultivated for its starchy edible root. Although high in calories and carbohydrates, yucca root also boasts a good amount of important nutrients, such as vitamin C, manganese, and potassium.

A use of Yucca Root is to create a cross and then placing the Yucca Root cross on the hearth to place a warding over the home protecting all within from the negative energies or entities outside.

While Yucca Root can be added to anti-curse mixes or used in blends to protect against hexes, an older method of this was to rub a slice of Yucca Root over the body for seven days. This was said to remove curses, hexes and protect against illness. For those who don't like the idea of rubbing a root slice all over thier body there is another method for these effects, and that is to add Yucca Root to your bath.

An old Folklore belief involving Yucca Root is to take the fibers and create a hoop, then to jump through the hoop seven times to shape-shift into an animal form. While this may not be true to the full extent of becoming an animal, remember this was most likely done during a ritual to call on the strength of an animal.