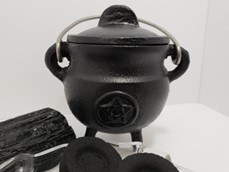 This is a great alter or ritual tool. With the black coloring, this is an excellent addition to spells to repel negativity from a home, business, or person.

Iron is an enigma – it rusts easily, yet it is the most important of all metals. 90% of all metal that is refined today is iron. Most are used to manufacture steel, used in civil engineering (reinforced concrete, girders, etc), and in manufacturing.

Iron was once the most durable metal known to man, which was reflected in mythology and folklore. Thor's hammer Mjolnir was forged of iron, and even in the Norse myths, the legendary heat retention properties of iron were demonstrated: the hammer would become so hot when thrown, Thor wore iron gloves to protect his hands. The legendary strength and durability of iron make it a natural component in spells of protection. Many a witch obtains iron items, such as antique keys, padlocks, or spikes, and places them by the door of their home to keep out poltergeists and other unwanted spiritual visitors.