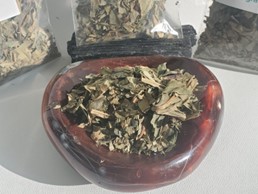 Deer’s Tongue gets its name because of its leaves’ shape; they are long and narrow with a reddish-purple streak. It is commonly found in damp, flat pine woods of the coastal region from North Carolina to Florida.

Deer’s Tongue has a chemical called coumarin, which is found in crystals on the leaves’ upper side; this gives the herb its signature vanilla scent. The plant has clusters of deer-tongue-shaped leaves, three-to-five-foot central flower stalks, and purple flowers that bloom in late summer. The leaves can grow to nearly 10 inches long.

Other Metaphysical Properties of Deer's Tongue

Medicinal Uses: The leaves can brew a warm, bitter, diuretic tea used to reduce fevers and cleanse the blood. Deer’s Tongue has been used for its diuretic effects and applied locally for sore throats and gonorrhea. Native Americans used to make Deer’s Tongue mixtures that were used as stimulants and sweat-inducing agents. Deer’s Tongue was also shown some effectiveness in treating malaria.

Culinary Uses: The leaves of Deer's Tongue give off a vanilla-like odor when crushed, so it was once collected to flavor pipe and cigarette tobacco, as well as a fragrance in cosmetics and soaps. Deer’s Tongue leaves can be added to a salad as a substitute for lettuce.