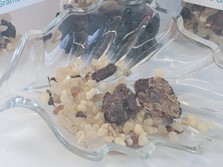 This is a combination of both Frankincense and Myrrh resins. They are in chunk form, so the sizes of the pieces may vary.

Frankincense assists in removing negative energy from a space, providing protection, and creating an elevated spiritual awareness. It is often used to lift moods, ease anxiety and stress, and for purification.

Myrrh is burned purification, exorcisms, protection, and healing. Commonly used in ancient funeral rites, connecting with the dead and the underworld.

Myrrh gum/resin is an excellent offering for working with many of the old-world deities like Ra, Isis, Adonis, Leto, Nereus, Poseidon, Latona, Protogonos, to name a few. It resonates with the energies of Mars.

Occasionally you may hear of Frankincense and Myrrh Resin being used in a tincture or tonic, these could be used before meditation or rituals, however the most common way is either using charcoal discs to warm and melt the resin or as incense sticks or cones.