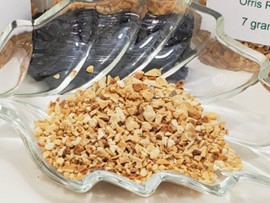 A versatile, unusual, powerful root that should be in any magickal cupboard!

A Moon plant, orris root is used for digging deep into the Moon-ruled subconscious and uprooting what is hidden. It can also be used in divination and dreamwork. The iris is also called the fleur-de-lis. This Moon plant has been associated with dominion and war, which gives it a nice protective aspect. Orris Root is considered a Venus herb, widely used for love magick. In Hoodoo, it is known as Love Drawing Herb (and Queen Elizabeth root). The powder form is blown onto clothes, sheets, and so forth to make sure that the owner returns one's love.

Orris is harvested in Italy and is a traditional fixative for scent since ancient Greece. Great for smoothing out the combined scents when making infused oils. Many consider that its essential oil, which is locked in these roots and which develops its scent over time, smells like violets.

Orris Root is said to be connected to the pantheons of ancient Greece and Egypt. Use Orris Root in offerings of Aphrodite, Iris and Hera or for Isis, Osiris.