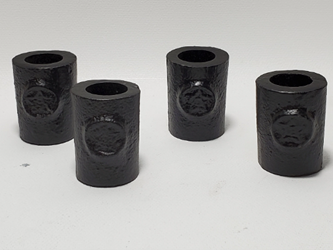 Iron was once the most durable metal known to man, which was reflected in mythology and folklore. Thor's hammer Mjolnir was forged of iron, and even in the Norse myths, the legendary heat retention properties of iron were demonstrated: the hammer would become so hot when thrown, Thor wore iron gloves to protect his hands. The legendary strength and durability of iron make it a natural component in spells of protection. Many a witch obtains iron items, such as antique keys, padlocks, or spikes, and places them by the door of their home to keep out poltergeists and other unwanted spiritual visitors.

The pentagram dates to 3500 BC. In Mesopotamia, they inscribed the symbol on their pottery and other artifacts. The Hebrews used it as a symbol of truth and represented the Pentateuch, the first five books of the Hebrew Scriptures. The Pythagoreans of ancient Greece were fascinated by the mathematical purity of the symbol and viewed it as a sign of perfection. Ancient Babylonians used it to represent the gods and religious beliefs of their culture.

The symbol of the pentagram is used in many Wiccan ceremonies. Wiccans see the star as symbolizing the elements of air, water, earth, and fire, perfectly balanced to create the fifth element of spirit. The pentagram ring is a popular talisman worn by Wiccans and other Pagans. This star of life is often used on altars and widely used as a ritual tool, representing feminine energy.

The pentagram has long been a spiritual symbol. Despite the negative stigmas attributed to the five-pointed star, it remains an ideal for those seeking spiritual clarity and divine knowledge. Wear a Pentagram of Solomon or Divine Protection Amulet to help guard you against negative energy. Incorporate a Pentagram Chalice into your next ritual to restore balance and peace in your life. This sacred symbol maintains its ancient mystical attributes and is a powerful tool for all who draw from it.