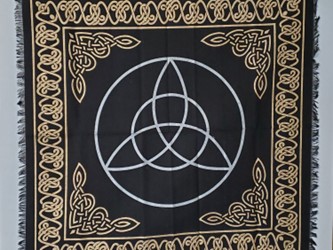 This is a black Altar cloth with a gold Celtic braid border. Perfect for small altars, it is 24" x 24". Making it the ideal size for traveling and an outside setting.

Triquetra means "triangle" or "three" (tri-) "cornered" (Quetrus). It is made up of three intersecting vesica Pisces. The Vesica Pisces is the shape formed by the intersection of two like circles. A triquetra symbol is sometimes connected with a circle.

An ancient Celtic symbol, the triquetra, is deemed one of the oldest, dating back to as early as 500 BC. According to some teachings it was used much as the Triple Moon symbol to represent the triple goddess (maiden-mother-crone). Since then it has become the symbol for the Holy Trinity among Christians in Ireland. The symbol is often used to represent the three fundamental elements – air, water, earth, or the infinite cycle of life. It is also known as a rune of protection.

It is hand washable; let it air dry. Machine washing may make the color fade or cause unraveling.

Most practices use the Triquetra as a representation of the never ending. The symbol has been said to show the flow of energy, their is no begining and no end, just the constant flow.

Celtic warriors would inscribe the Triquetra into thier sheilds to aid them with protection in battle. The Scandinavian people used the Triquetra for protection as well and the symbol was used by those that went a Viking or as a symbol of protection on the ships.