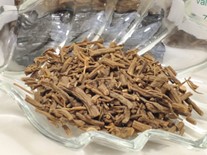 This is an herb associated with Samhain and Yule. It is a European herb used in Eclectic medicine for the treatment of short-term depression.

It has been used in rituals for relieving self-condemnation and aids in developing self-acceptance. This herb helps to invoke paternal protection, purification, and consecrating thuribles. They are used in rituals for evoking animal spirits without using animal ingredients. Cats love it and will go after the herb just like they do with catnip.

It has a calming effect on the mind and body.

It is recommended not to drive while under the effects of valerian when taken internally.

During the first world war Valerian Root was used to treat shell-shock, headaches, anxiety, cramps, ward against plague and even as an aphrodisiac. Historically Valerian Root was seen as a cure all, most medicines in the 16th century contained some amount of Valerian Root.

The strong aroma that comes from dried Valerian Root is where the herb received the use to ward off evil spirits and negative energies. It is said that sprinkling a fine dust of Valerian Root across your door will stop unwanted guests from trying to enter.