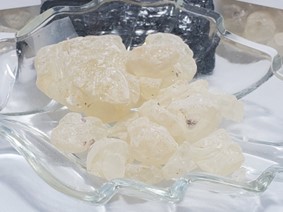 Copal Resin is one of the oldest forms of energy cleansing and is the best method of cleansing crystals and spaces. It is a natural tree resin that exists in two states, but it is not really either a hard resin or sap. It is considered sacred to the people of Mexico, South, and Central America. Copal has a very long history in the spiritual and metaphysical realm for removing negative energy, restoring a sense of peace and calm.

It is a part of the Buresa tree family, a medicinal for the Maya people in southern Mexico. The medicine from the tree is traditionally used to clean the body of disease and keep mosquitoes away.

Copal is an entirely natural resin used to purify spaces and objects. It has a clean, light woody scent like pine or turpentine. Copal is one of the best for clearing negative energy and raising positive change possible. Burning Copal increases peaceful energy creating a positive and loving atmosphere.

Burning Copal can be used to cleanse jewelry and crystals by holding the items in the smoke and turning them, so the smoke covers all areas of it. To cleanse a room, light the resin and use a feather to fan the smoke into all corners, around, and below all items in a clockwise manner.

Copal is believed to call upon deities associated with fertility and creation, the god Tlaloc and the goddess Chalchiuhtlicue.

Studies have shown that White Copal Resin has many medicinal uses from treating skin conditions, plugging tooth cavities, expectorant, and treating muscle aches and pains. Chemically the resin is made of isomeric tertiary and cyclic terpene alcohols that have antiseptic and anti-rheumatic properties.

White Copal Resin is considered the “blood” of the tree and can appease the Gods when burned as a sacred offering.